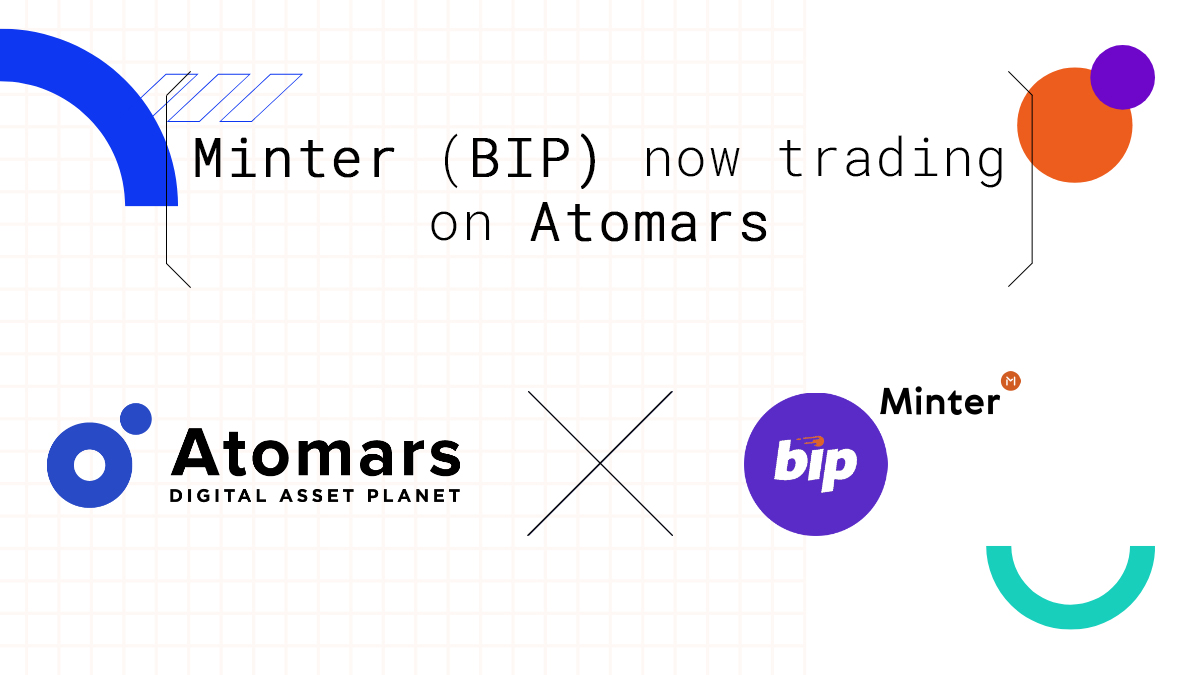 Minter is a blockchain network that lets people, projects, and companies create and manage their own coins and exchange them at a fair price with absolute and instant liquidity.

Minter is a next generation currency that allows users to build their own coin and set its price. The coin created can be transferred and/or exchanged for other coins immediately and unlimited. Minter network allows the creation of coins that are for use regularly, coins that are quickly transferable and give value providers the ability to be their own banks.

Minter’s native coin is called BIP, which stands for Blockchain Instant Payment. It aims to fulfill the real-world market needs, including fast settlements among mobile users, low transaction fees (or even transferring funds free of charge), and, of course, a solid supply of 10 billion BIPs.

Back in 2017, a team from DeCenter, had an idea to design a blockchain that would allow any user to create 100% liquid coins in a couple of clicks. Such coins would enable users to instantly buy or sell any volume at a market price and without the need to turn to exchanges or similar services.

For over 18 months, before the launch of the mainnet, a team of seven developers has been working on the Minter ecosystem.

Creating a blockchain from scratch is a challenging and time-consuming process. It requires large teams of developers and years of work. P2P communication systems, a consensus algorithm, and many other typical blockchain modules have to be built anew. Minter team did not have such capabilities at the time and decided to take a ready-made solution and start from there.

When selecting a base to build on, team considered the following projects:

•  Ethereum: https://www.ethereum.org
The first blockchain the Minter team came up with was Ethereum. The main node is written in Go, which is considered one of the fastest programming languages with a low entry threshold. It is easy for the community to audit the code, and for the team, to find new developers.

•  Graphene 2.0: https://github.com/cryptonomex/graphene
Graphene is a technology that lies in the foundation of various blockchains (Steem, BitShares, to name a few). Graphene 1.0 with its throughput of hundreds of thousands of transactions per second was a real breakthrough.

•  Tendermint: https://tendermint.com
When selecting the framework team eventually picked Tendermint from Cosmos. Based on the DLS protocol, it does not require any “active” mining — as is the case with Proof-of-Work — and can ensure the secure operation of the network provided there are more than two-thirds of “honest” actors.

How Does Minter Work?

Think of Minter as the World Decentral Bank, as every coin is backed with reserves of BIPs, which can only be mined by PoS validators. Such reserves allocated by the smart contracts and driven with mathematical formulas create a very fair market value of any coin in any given time solving the price discovery problem.

The Minter blockchain runs on the Tendermint engine with the DPoS (Delegated Proof-of-Stake) consensus algorithm, the technology behind Cosmos Network that makes Minter network undoubtedly suitable with many ongoing and upcoming projects of this promising ecosystem. The programming language used for the implementation of the client/node is Golang.

The network itself acts as the Cosmos Zone, meaning that users can exchange BIP and other issued coins for Bitcoin and Ether. They can also use smart contracts run by separate zones via Cosmos Hub, the feature to be available in 2019.

The distributed ledger or blockchain technologies change the way people interact with one another, while the Peer-to-peer (P2P) economy is just at the point of the new era of specific money, where everyone has something to offer. Absolute and instant liquidity is the key competitive advantage of cryptocurrencies run with Minter, as users can buy, sell, and swap coins in seconds without the need for exchanges.

Unlike many blockchains in the market, Minter does not plan to bring everything on-chain. Minter blockchain is following the common trends, enriching them with its own unique features: open, permissionless network, fast transactions, coin creation, etc. Applications and services developed for Minter are called MApps (Minter Apps). A typical MApp is a microservice integrated into a site or a mobile app, letting users sign the transactions, view balances, mint and remint coins, and use other features enabled by the blockchain under the hood. Right from the start, the Minter Team will release open-source SDKs for iOS, Android, JS, and even a Telegram bot kit.

Minter can be considered one of the friendliest environments for developers: created with very simple and robust API, the Minter blockchain can support lots of client-side apps developed with SDK, for example, iOS/Android wallets, Chrome extensions, desktop, and mobile web applications. Minter architecture supports off-chain usernames, leading to a more simple way of transferring value and understanding statements.

The notable feature of Minter is its transaction speed. It processes more than 10,000 transactions per block in 5 seconds. Here in minter, the engine is tied to DPoS ( Delegated Proof of Stake ) Blockchain consensus algorithm. 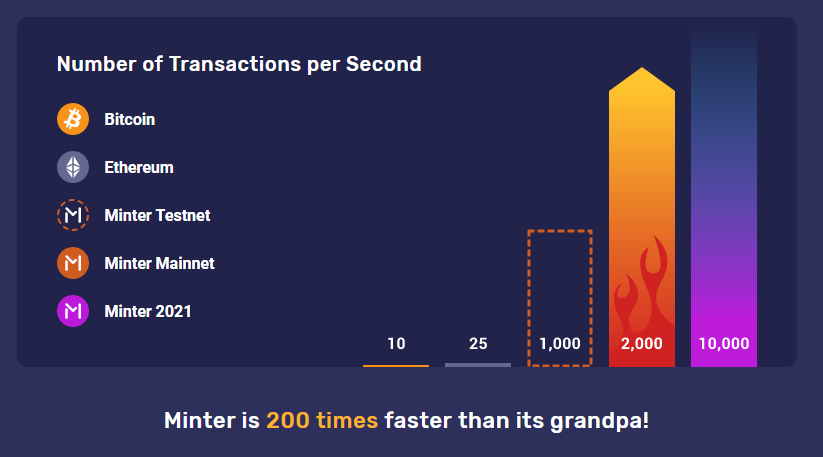 The coins created on minter cannot be used for paying goods and services. Thus, there occurs a situation of exchanging those coins into other crypto coins or fiat currency for instant payment usages.

Thus, minter allows for exchanging the created coins to other crypto coins or fiat currency within and also outside the network.

Minter is an open source software that allows users to create their own coins and manage them and exchange them when they decide.

It also allows users to fix the price that they want to their coins. This freedom for users inside the network makes minter stand out of the crowd.

The main key features that make minter spread over in short span is its transaction fees.The transaction fees on minter network are never exceeded than $0.01, for whatever be the volume of exchange. 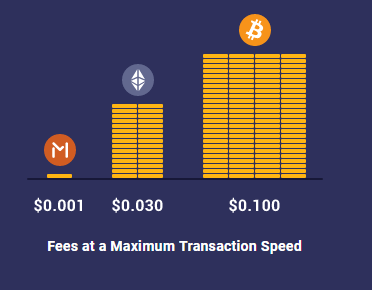 The reason is that minter has a high network throughput, in which thousands of transactions occur per second, which can make them good profit even on setting transaction fees very low.

The DPoS consensus algorithm engine of minter network provides high reliability. This allows validators and delegators for profit from their own contribution to the network.

This minter network has a large community of users and developers all over the globe.

MApps are applications that are developed on the minter network. Minter app is integrated into a mobile app or a site. This will allow users to sign transactions, create, and manage coins and other features.

You can also create your app on minter network. Minter Network allows for building and managing applications for your business.MApps can be developed with better UI/UX for both desktops and mobiles.

Integration of Minter and TON

Minter blockchain network team had integrated with Telegram Open Network (TON) network. Minter believes that with TON network, they will be able to implement all of their ideas to the fullest.

This Integration of Minter and TON enables Minter users to transfer any coins issued on minter network to TON. Minter users will be able to send and receive micropayments in Minter-based coins With one of the services Telegram.

Below are the step-by-step approaches Minter plans to take to work with TON :

1. Exchange of Any Minter-Issued Coin to TON
2. TON Storage for User Data
3.Building of Smart Contracts
4. Use of TON for Micropayments
5. Decentralized Registration of Username.

Minter (BIP) tokens are available for trading on Atomars exchange with the following trading pairs: BIP/BTC and BIP/USDT.

Atomars exchange is the a digital assets trading platform launched in June 2019. Atomars exchange is a fast, safe, secure, and user-friendly platform that seeks to make everyone enjoy their time. Most of the popular cryptocurrencies like Bitcoin, Ethereum, Litecoin, and many more are available on the platform. Their web and mobile apps provide ease of easy and fun trading on the go. Unique features include decentralized private user wallets, quick exchange, enhanced user portfolio and market barometer section.